As every month, the session was held for the month of October, respecting the safety and hygiene protocols, due to the current pandemic.

The luncheon had a special guest Pepe Maiz Garcia, who is the owner of the baseball team 'Sultanes' in Monterrey, and talked about the effects of the cancellation of games and how the pandemic has changed by playing matches behind closed doors.
In addition to honoring us with his presence, he had the detail of giving all the attendees a special gift, an autographed ball, and in reciprocity thanking him for his visit, the club President   Felipe Mendoza, gave him a recognition.
After this, we carried out the usual protocol and inducted partner Karlos Kaldman of Assist Card.

President of 529, he is elected to the board of directors of the Tijuana Committee on Tourism and Conventions (COTUCO).

During the ordinary annual meeting held on October 8, 2020, the members of the board of the Tijuana Tourism and Convention Committee (COTUCO) elected Alfonso Dávila Velázquez, to lead the Tourism agency for the period 2020-2021.

After protesting, the new leader of this agency said he would lead an in-house job, taking into account all members of the value chain, authorities, as well as various agencies for boosting Tourism activity.

After thanking the support received and recognizing the work of his predecessor, he made known to the board of directors that he will promote the Integral Project of Operation of the Tourist Training of the city and the Integration of the Tourism Sector in the Tourism and Convention Committee of Tijuana; while working on projects in conjunction with different units and institutions such as the Universidad Autónoma de Baja California (UABC) and the Baja California College of Tourism Professionals, among other projects.

The board of directors was formed by Alfonso Dávila Velázquez as President, Mr. Adrián Bustamante González of the Hotel Association as Vice President, Mr. Carlos Cruz Archundia of 529 as Secretary, and Ing. Raúl Aispuro Funes, was appointed treasurer. 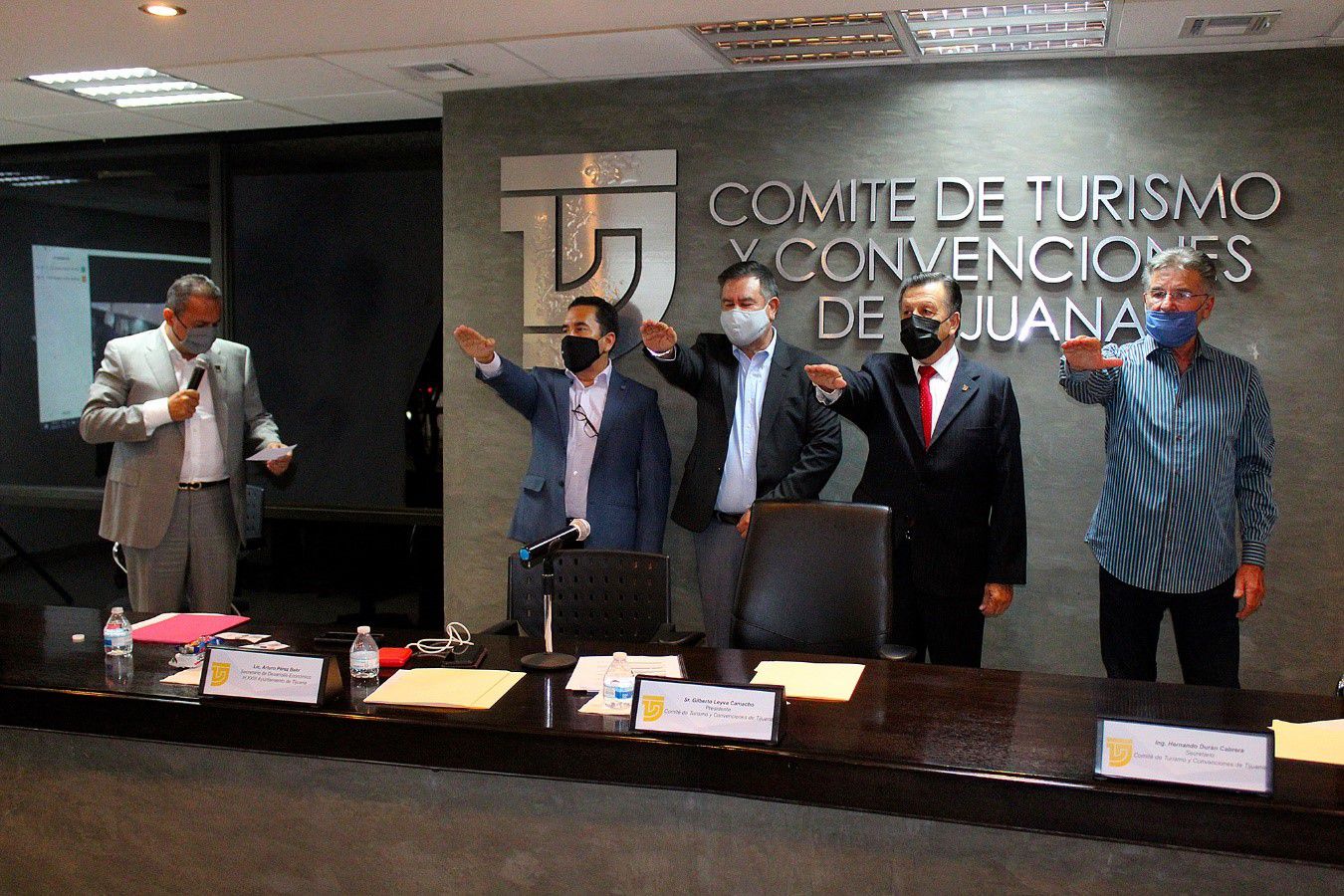 "My deepest thanks and appreciation to the Board of Directors for this achievement, this is the result of the joint effort made with each of the active members who were pleased to refer and suggest new members and the latter to believe in Skål International Guadalajara!!!" 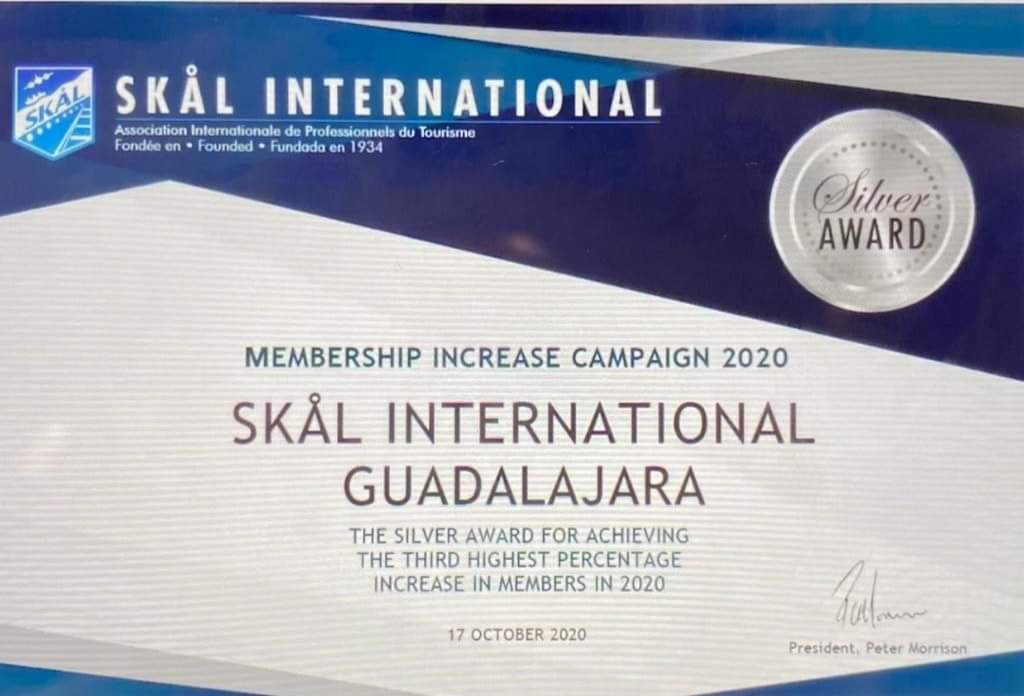 The monthly luncheon was hosted by Skålleague Paz Marcela Voss, which took place at the family-owned Ranche ‘Los Sitios’.
President Jorge Berrío offered each Skål International member a Viking helmet that was a pretext for countless photographs and videos.
Banquetes del Castillo served the banquet consisting of a Mexican barbecue.
As a special activity, prior to the monthly meal of the club, a tasting pairing was held with the Beer Sommelier Deborah Uribe with beers sponsored by Grupo Modelo. 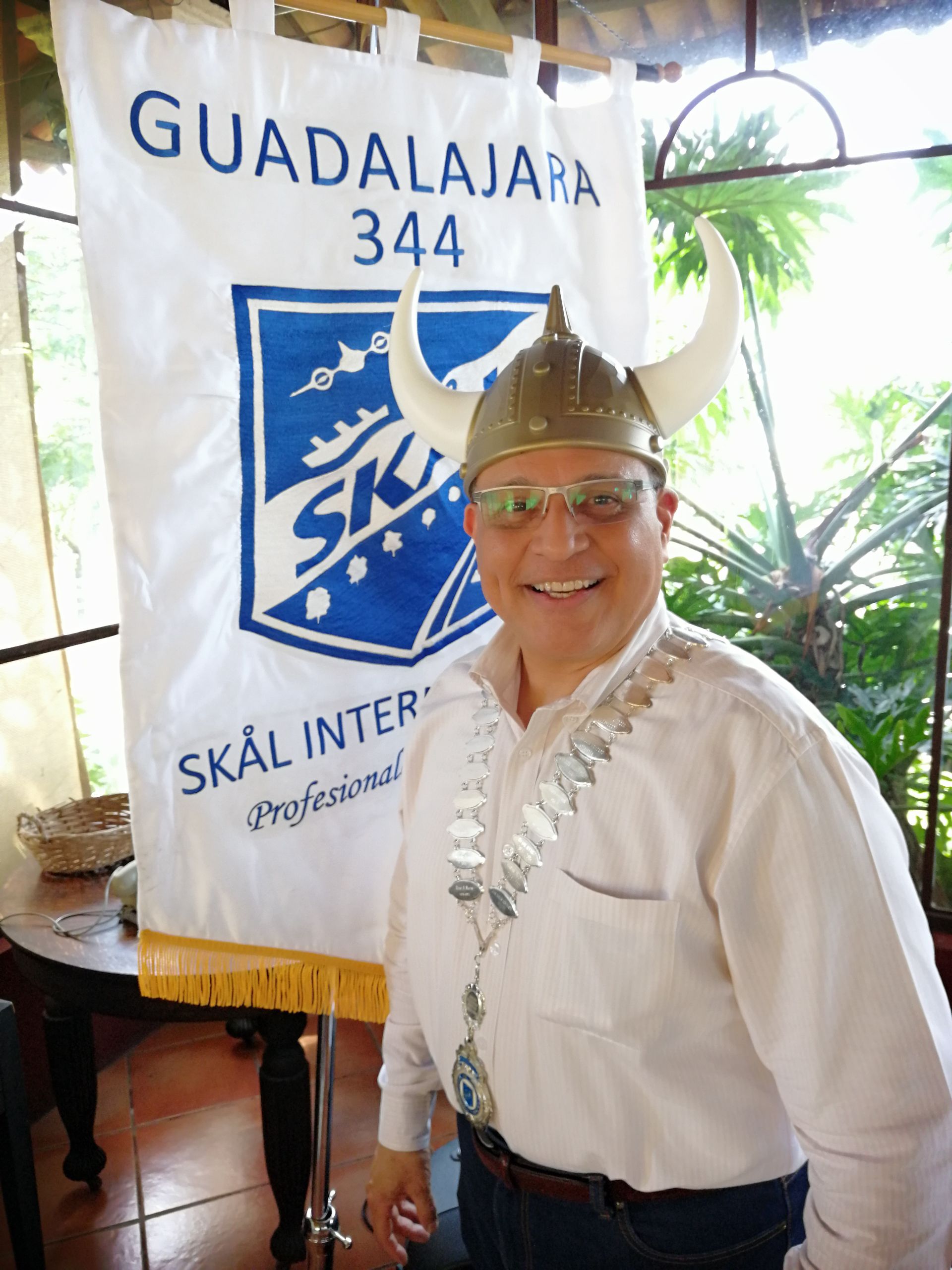 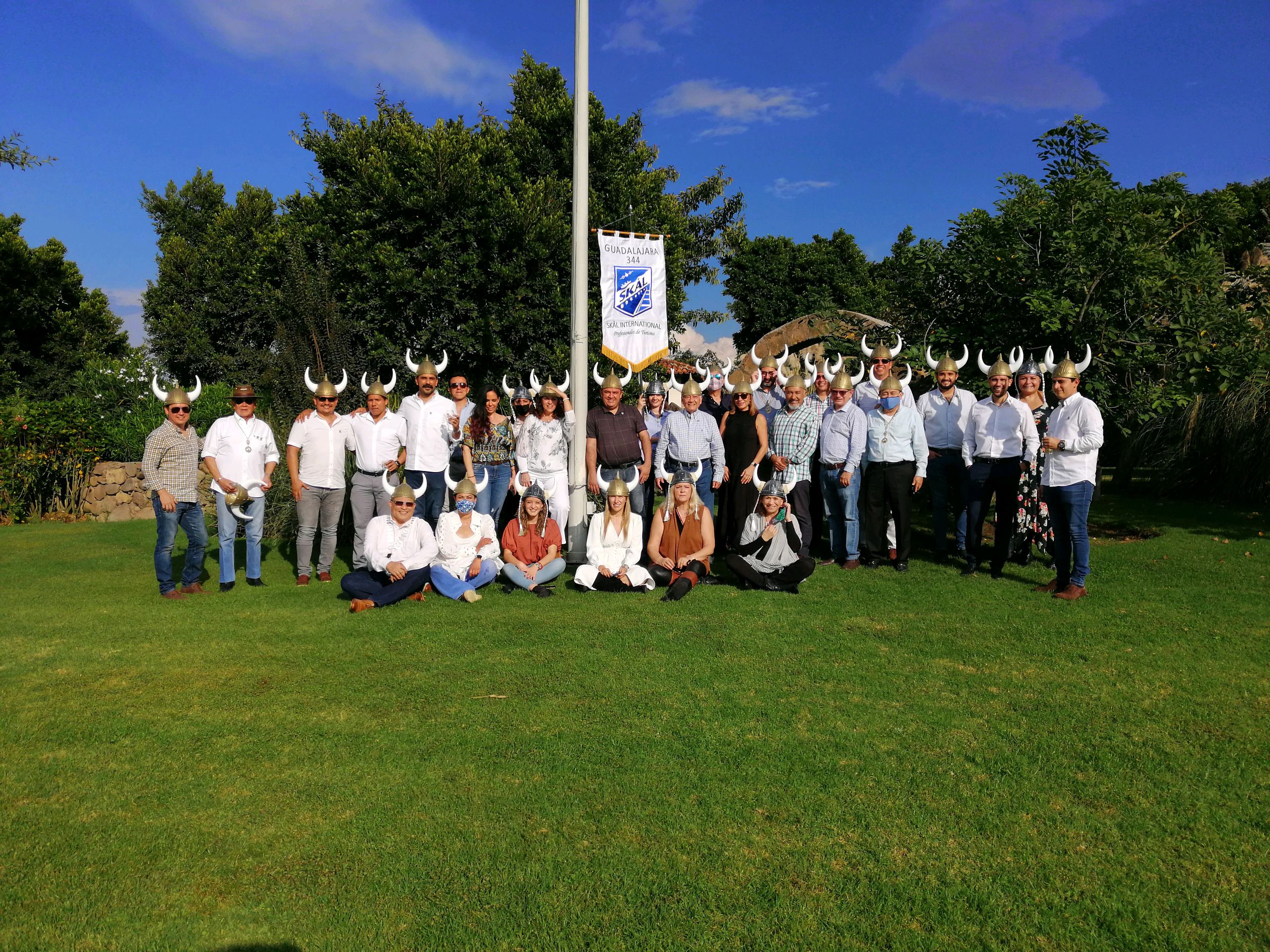 We held our Annual Assembly and had unanimous votes, in the re-election of the entire current club board for 2021.

Skål International Mexico City held the October gathering at the Camino Real Airport Hotel, the home work base of the Club´s President Ricardo Córdova, with the participation of more than 30 Skållegues, followed by all health security measures. The Chef Omar Cervantes delighted everyone with an exquisite menu.

The  Annual Assembly and had unanimous votes, for the re-election of the entire current club board for 2021. 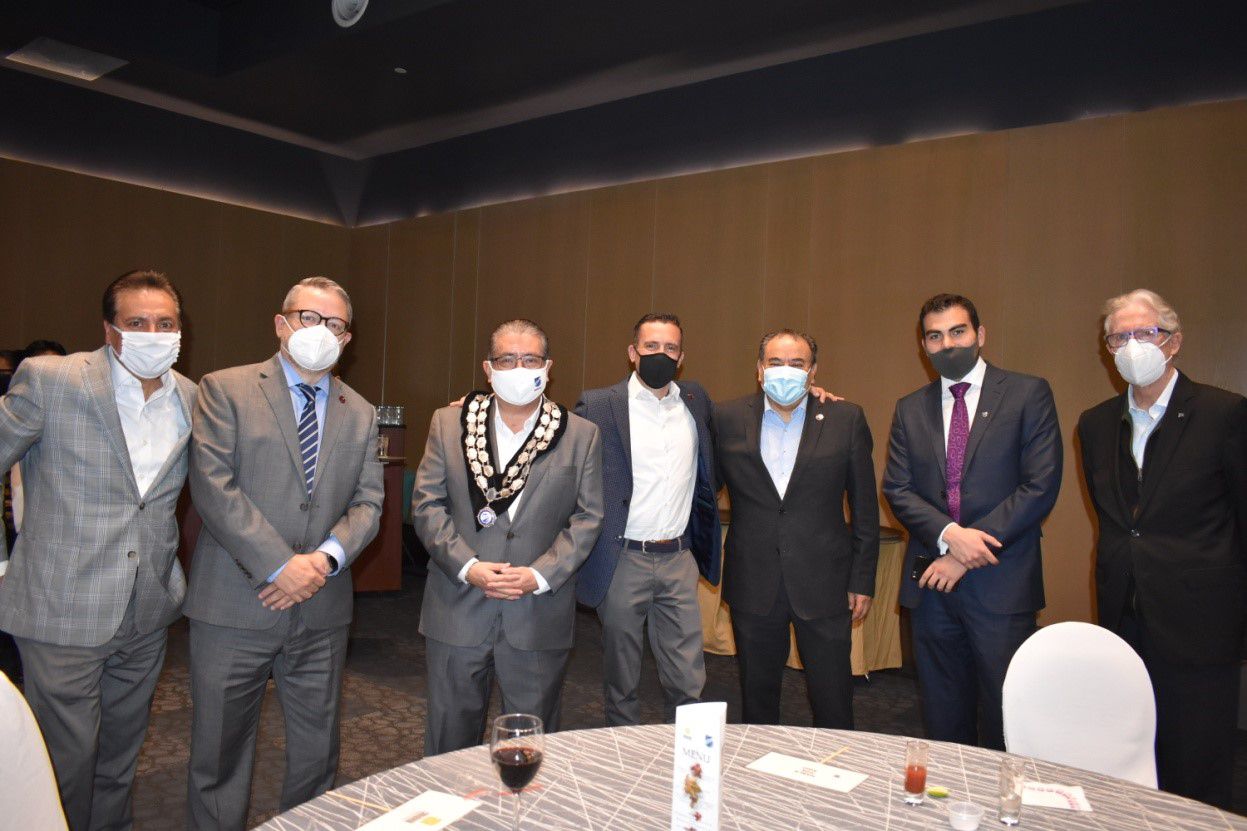 Every Wednesday, Mexico City holds its traditional ‘Tequila time’ talk, thanks to our Cohabitation Committee headed by Cristy Vazquez and Maylen Jean whom have held endless interesting weekly talks. During the month of October we had the participation of Skålleague from Guanajuato Fernando Olivera, with the theme ‘El Turismo del mañana’; the second week we had a delicious experience with Rodrigo López ‘Wine and Chocolate Tasting’; the third was with Skålleague from Guadalajara Araceli Ramos ‘Raven World’ and the following week with Skålleague Andrés Mejía the ‘Origin of the Day of the Dead’. 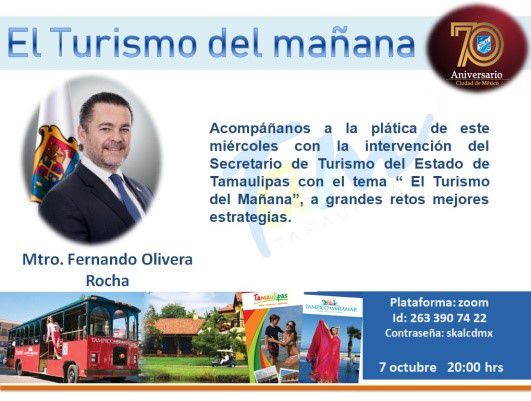 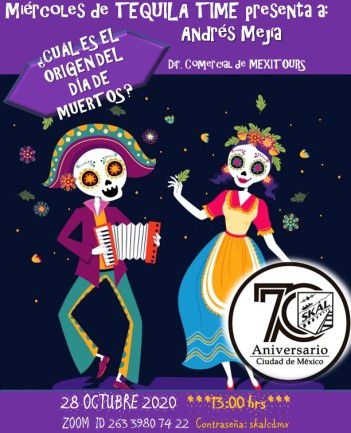 The month of November, Skålleague, Alejandro Cañedo, with the theme ‘The Art of Selling Illusions’ and the second week once again with Jorge Mejía with an interesting talk of 'Hernán y la Malinche - Meeting of Two Worlds'.

Every Wednesday we invite Skålleagues from all clubs of Mexico to join in at 1 pm / Mexico City time via zoom with a glass of tequila!

If you want to see some of the past talks, we invite you to visit our YouTube channel. 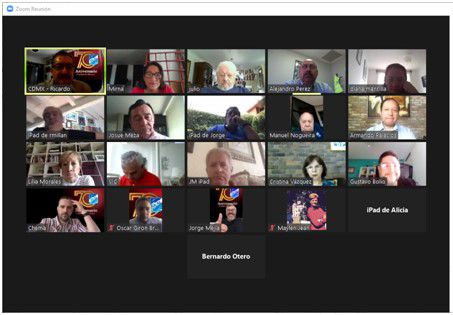 Several members and partners of Skål International Isla Mujeres-Puerto Morelos 723 met on the last Friday of June for a small gathering, both in person and virtually.

There was an attendance of 22 people, enjoying a pleasant 7-course meal with Mexican wines. 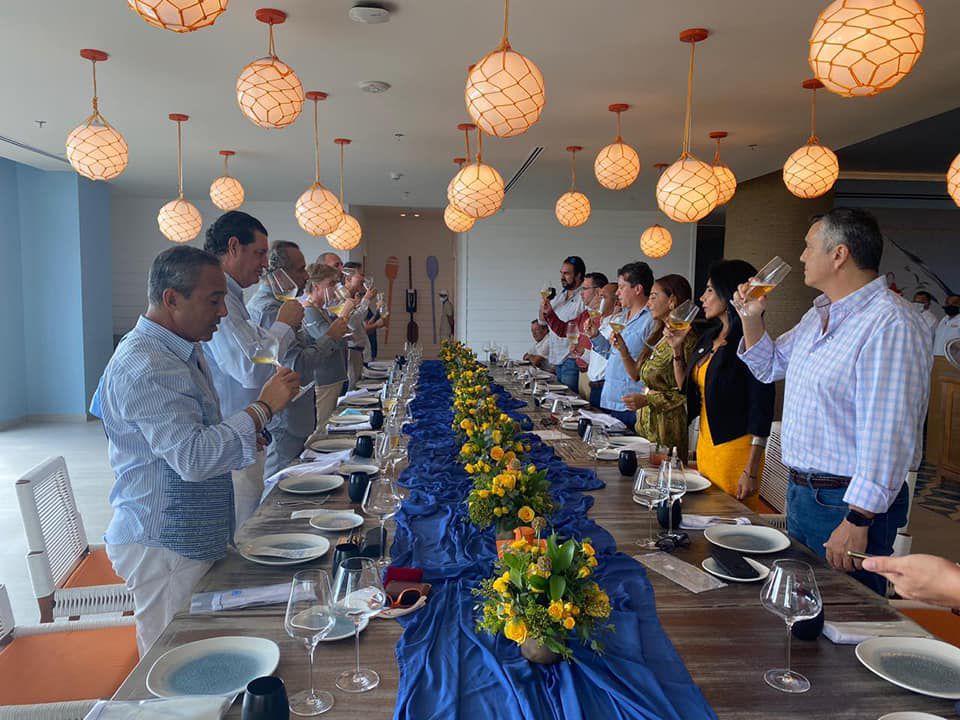 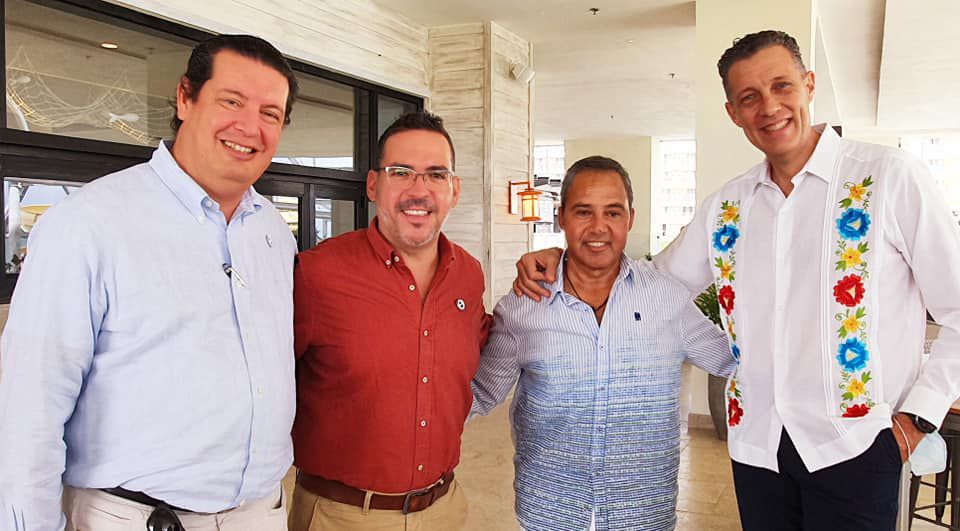